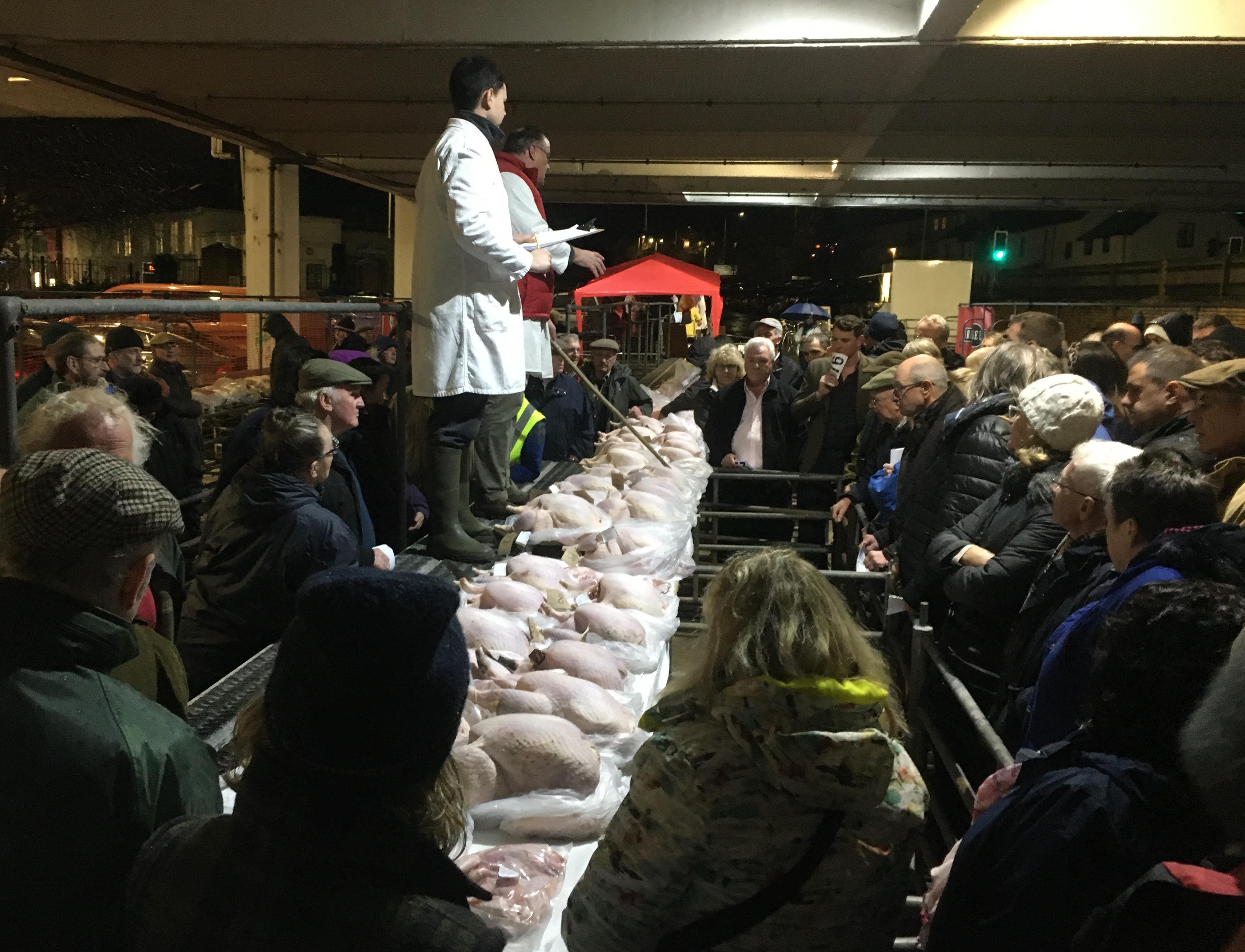 The event once again attracted a large number of buyers from the town folk and the surrounding rural areas, who enjoyed the atmosphere of this event, despite the wet and windy conditions.

The quality of the birds was once again impressive; with top price of the day for a 17lb Boned & Rolled Turkey reaching £80 from Mr C Reeve of Halwell. While the top price Turkey was £70 for the biggest bird of the day a whopping 30 ½ lb. also from Mr. C Reeve.

As usual the popular weights for the Christmas table between 10lb and 12lb were regularly making £3 per lb. Turkey Crowns met a fierce trade selling to £40 each for the Walters Family from Kingston and packs of Legs selling to £1.45 per lb. and Wings selling to £2 per lb. supplied by Mr. S Slade of Aylesbeare.

Oven Ready Chickens sold to a top price of £34 for a 12lb bird from Mr. C Reeve of Halwell and Long-Legged Chickens from Mr. P Cole regularly sold to £18 each.

There were no real highlights in the Geese section with a top price of £66 for a 16 ½ lb. Goose (£4 per lb.) from Mr. P Calcraft of Aylesbeare and closely followed at £60 from Mr. D Mason of Sladesdown Farm.

Mr. Boyne of Dawlish had his usual consignment of boned and rolled Pheasants which attracted keen interest hitting £12, boned and rolled Quail topping £11 and boned and rolled Ducks reaching £16 a pack. Braces of Pheasants in feather reached £3, wild Ducks to £4 and a brace of Oven Ready Guinea Fowl sold to £13 from Mr. T Curtis of Cadleigh.

A selection of local freshly butchered Mangalitsa Pork from Tucketts Farm, Netherton sold to £26 for a Shoulder and Loin. £22 for Legs and £22 for a Shoulder. Packs of Pork Chops & Leg sold to £17, with Chops and Belly Pork selling to £16 from Mrs. V Siddall of Ashburton.

Rendells Newton Abbot would like to thank all the vendors and buyers for their continued support and wish everyone a prosperous New Year.