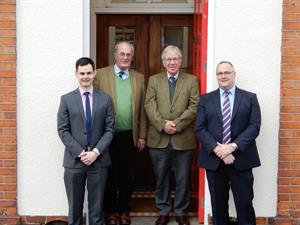 Rendells are delighted to announce the appointment of two new equity partners Michael Pedrick and Russell Thomas who along with the existing partners Clive Morgan and Peter Farnsworth have now formed Rendells LLP trading as Rendells.

The new partnership came in to effect on the 1st January 2019 and Clive Morgan and Peter Farnsworth are pleased to be joined by the two new partners to ensure the continuance of this long established and respected firm of Chartered Surveyors, Auctioneers, Estate and Letting Agents and Valuers.

Both Michael and Russell have been with the firm a number of years and are well known and respected in the community and are looking to expand the business.

Michael Pedrick, based in our Totnes office joined the firm in 1993 and has been an associate partner since 1997 is a Chartered Surveyor and a Fellow of the Central Association of Agricultural Valuers and undertakes all aspects of rural professional work including valuations, tenant right, land and property sales and tenancy work.

Russell Thomas first joined the firm on a year’s placement from Harper Adams University in 2009/10 and then re-joined the firm full time in 2011 and since then he has qualified as a Chartered Surveyor and is a Fellow of the Central Association of Agricultural Valuers. Russell is also based at the Totnes office and undertakes farm subsidy applications, valuations and machinery auctions and heads the planning department for the firm.